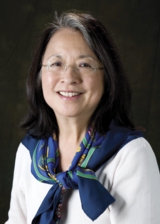 It is generally acknowledged that Pauline, highly regarded by her fellow brokers and a REALTOR® since 1982, sets a standard, both in the level of service rendered to her clients and in her brokerage production. Born in China, but raised in the United States, Pauline attended Wellesley College, earned a B. A. from Barnard, and M. A. and M.Phil. in history from Columbia University. She taught Western Civilization and Asian history at Brooklyn College and at Central State University in Oklahoma.

A resident of the Brookline/Newton area since 1979, Pauline was instrumental in the organization of The Friends of Larz Anderson Park and Boston Midsummer Opera.  She has served on the boards of Boston Lyric Opera and Brookline Library Foundation and is the New England Regional Chairman for Met Opera National Council Auditions -- a position she has held for over thirty years. Her daughter, Sarah Shun-lien Bynum, who lives in Los Angeles, is a short story writer and novelist.  Her son, Taylor Ho Bynum, a jazz musician and composer, is the Director of the Barbary Coast Jazz ensemble at Dartmouth College.

Click below to see a sampling of the current offerings being marketed by Pauline: